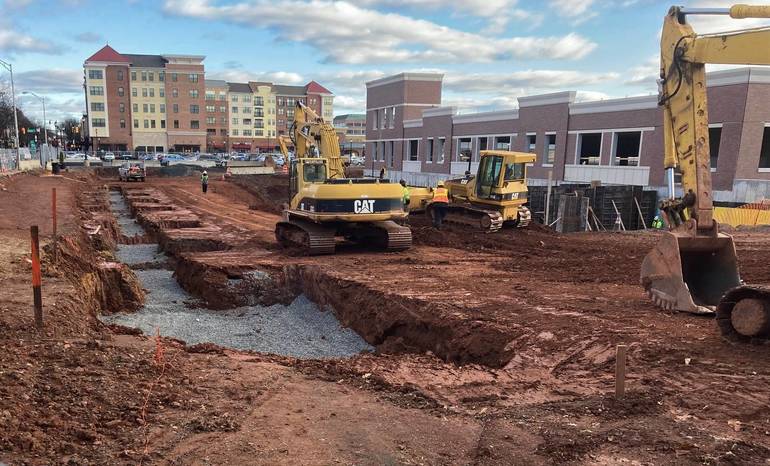 This view of the parking deck construction in Somerville along West Main Street looks east towards the Edge I apartments shown in the distance.

SOMERVILLE, NJ – The long-awaited construction of a three-level parking deck on West Main Street, the first phase of the Edge II luxury apartments, has been moving rapidly in the first weeks of the new year.

The structure has been taking shape as a heavy-duty crane has been dropping in pre-fab concrete and brick blocks weighing several tons, working its way from Main Street south towards Veterans Memorial Drive.

The relocation of underground utility lines this summer preceded several months of excavation at the site to accommodate the lower level of the parking deck, which will include a second at ground level and the third level on the second floor of the complex.

Edge II, a five-story building, will include 153 apartments, and when completed, will be the companion to Edge I, built on the other side of Davenport Street. Both buildings front on West Main Street. The apartment building fronting on Main Street will obscure much of the parking deck structure.

The parking deck will feature 521 spaces, with 291 spaces exclusive to the tenants of both buildings; the remaining 229 spaces will be available for public parking, helping to alleviate the shortage of parking in the downtown district. Edgewood Properties will own and manage the deck, and pay the borough 15 percent of parking revenues monthly, according to Colin Driver, the borough’s Economic Development director.

Entry for residents will be off South Doughty Street; public access to the parking deck will be off of South Davenport Street, according to Ron Aulenbach, director of Engineering and Planning for Edgewood Properties.

A few dozen parking spaces will be available in a surface parking lot off Davenport Street adjacent to the Chase Bank.

Edgewood Properties, whose principal is developer Jack Morris, began the $100M redevelopment of the 14-acre site on the south side of Main Street several years ago, with the completion of the 70,000 square-foot ShopRite Supermarket, and Edge I, a five-story luxury apartment building that features Wolfgang’s Steakhouse and Starbuck’s on the ground floor, along with other retail space. Edge II will have a similar look, but there will be differences.

The new Phase II complex, across the street from Mannion’s Pub & Restaurant, is bordered by West Main Street, South Davenport Street, Veterans Memorial Drive West and South Doughty Avenue. The complex will include a second, three-story building that will feature a 40,000-square foot gym and fitness center connected by a foot bridge to the main structure.  It will be built alongside the main structure.

The ground floor will feature 34,000 square feet of retail space; the upper four floors will be residential.

Phase II will include several amenities, including a 20,000 square foot all-weather food court that will front on Davenport Street; a 40,000 square foot gym and wellness center; and a pool and bar on the top floor.

The façade facing South Doughty Street will be designed to imitate early 20th-century brownstone buildings, according to Driver.

The deck will include dedicated parking for the tenants of another building planned by Morris across the street next to Mannion’s.

The five-story building will have 45 apartments on the upper four floors; the ground floor will feature retail space.

Two dilapidated buildings on the north side of West Main Street next to Mannion’s will be demolished before construction can begin.

The Borough Council in July last year approved a $7.25M bond ordinance to help finance construction of the parking deck; the total cost of the deck is estimated at $14M, according to Driver; Edgewood Properties will contribute the balance, he added.

The borough expects to finance the bond over a 30-year period and will use parking fees and annual payments from its PILOT (Payment in Lieu of Taxes) agreement with Edgewood Properties, according to Mayor Dennis Sullivan.

Morris is the borough’s largest landlord. He also owns the Brookside Garden Apartment complex, a cluster of 642 units in two-story buildings on Mercer Street in addition to the Edge I and Edge II properties on West Main Street.