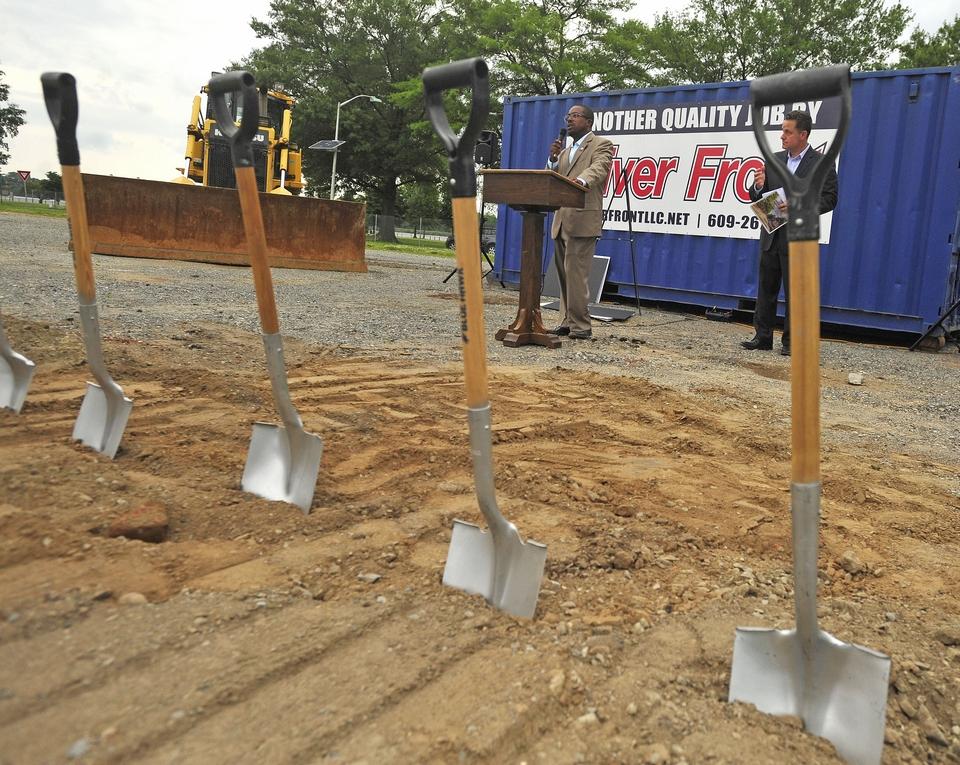 BURLINGTON CITY — It’s been a long time coming, but the time is finally here. That was the message from city officials and developers Wednesday at the groundbreaking ceremony held at the future site of the Pearl Pointe development, a new 184-unit residential development.

“When I was 10 years old, I watched this property get torn down, go to the ground,” Mayor Barry Conaway said.

Conaway said he and the city’s Common Council envisioned this area as a “catalyst” project for the city’s future.

“We believe, we know, this is going to make Burlington the jewel in Burlington County,” he said.

Officials stuck their shovels into what is known locally as the “gravel lot” to officially break ground on the long awaited project. Work on the project will begin Monday with an approximate 18-month construction timeline, they said.

Officials did not discuss prices on Wednesday, but have said that monthly rent could be between $1,375 to $1,750.

The site is within walking distance of multiple dining destinations, like the Riverview Cafe and the Brickwall Tavern, which officials highlighted at the ceremony.

“It didn’t take me long to recognize the great similarities between our downtown in Bethlehem (Pennsylvania), the wide sidewalks and the incredible history and the architecture, and the great bones and just the good vibe that the community had,” said John Callahan, the director of development for Peron, one of the developers of the site. ”(It’s) just a wonderful opportunity it was for us to be a part of the revitalization and the redevelopment of Burlington.”

The city had negotiated a $35 million deal with Peron Development, of Bethlehem, and Edgewater Properties of Piscataway, Middlesex County, in April 2017 to construct the project.

“You caught our vision, you caught our goals and you helped move it forward,” Common Council President Ila Marie Lollar said about the plans for the site.

Since the development was approved by the Planning Board in 2014, residents have wondered whether it would ever be built. Groundbreaking was originally expected to take place in October 2015, but was delayed several times because of design and development issues. It was delayed again after officials in April 2017 said the project would kickoff in July of that year.

“You’ve all been very kind and patient with us,” Mike Perucci, owner of Peron Development, said on behalf of both his company and his development partner, Edgewood Properties. “We’re excited to see this project get started. We’ve done a number of projects — I have to be honest, I think this project is one of the most beautiful sites we’ve had the opportunity to develop.”

The site has been considered a pinnacle of the city’s redevelopment, which also includes the former U.S. Pipe site. Matrix Realty is redeveloping that site into a fulfillment center for likely tenant Amazon and the Riverfront Promenade, which the city has redesigned into an open concert and entertainment venue.

The city is also reconfiguring parking to allow for 359 total spaces, officials said on Wednesday.

Assemblyman Jim Kennedy, D-22 of Rahway, who is also the principal of Skye Consulting and served as a consultant for the city on the project, said he was happy to see his “home away from home” continue to develop.

Despite the track record of delays, Callahan said that there would no longer be ceremonial shovels but actual construction crews at the site next week.

“Rest assured, the faith that you put in us will not go unrecognized and we’re not going to let you down, I can promise you that,” Callahan said. “I think this is going to be a site and a project that’s going to be transformative for Burlington.”