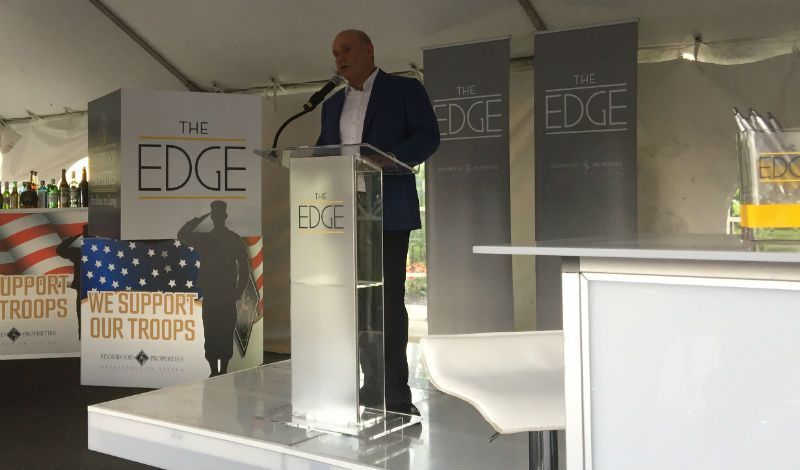 The display apartment was much nicer than many of the multifamily projects that are still popping up all over the state. Two (legitimate-sized) bedrooms (and full bathrooms), kitchen, eating area and a living room that felt like it actually could be lived in.

But that’s not what makes The Edge in Freehold, the latest venture from Edgewood Properties, unique. It’s who will be living there: veterans.

If Jack Morris, the CEO of Edgewood, has his way, veterans will move to the front of the line of all 209 of the one-, two- and three-bedroom offerings, both affordable units and market rate units.

“They should be first in line,” he said. “They should get preference. I don’t think anybody would debate or would disagree with that.”

He may be right. But it’s also factual to say few people are actually doing anything to create such scenarios.

Photos courtesy Edgewood Properties
The reception area at The Edge in Freehold.

Morris is. And he feels so strongly about it that he even had a grand opening event Thursday night, an unusual occurrence for someone who likes to do his good work behind the scenes.

“I’m not one who likes to stand up in front of the camera or a microphone,” he said. “But if it helps the men and women who fought for this country and gives us the freedom that we have, then I’ll do it.”

Morris said he knows the problems veterans face. Knows not only the tens of thousands who are homeless in this country, but the thousands of more living in substandard dwellings. He’s determined to do something about that.

The first step, he said, is awareness.

“The veterans are invisible,” he said.

Some were at the opening, including two of most high-profile in the state: retired Army Col. Jack Jacobs, a Medal of Honor recipient who does commentary on MSNBC, and retired Marine Corps Lt. Gen. Frank Libutti, a successful businessman.

Morris wants to help those the country has forgotten.

“I said to Gen. Libutti and Col. Jacobs, ‘How do we get the word out about this? Because I know a lot of veterans don’t even know it’s available.’ Gen. Libutti said, ‘Jack, I’ve got thousands that are either homeless or living in conditions that you would find unacceptable.’”

This is where the awareness comes in, Morris said.

“Here’s the problem: Veterans won’t say anything, because they’ve been conditioned to not complain, to fight through the elements,” he said. “They may not know places like this are here. It’s going to be part of our job to make sure that they know that this is available to them.”

Jacobs is grateful for the outreach.

“We’ve gone through a long period of time when we’ve tried to convince veterans that they’re victims; they’re not victims,” he said. “We need to convince them that they’re the best people in this community and we’re going to treat them like that. Jack Morris is doing that.

“We need to convince everybody else that what he’s doing is what everybody needs to do. Recognize the skill and contribution, the service and sacrifice of veterans, and then do something about making sure that they’re welcome in our community back.”

Local officials appear ready to do their part. Freehold Mayor Barbara McMorrow and a host of other township leaders came out for the event. As did state Sen. Vin Gopal (D-Ocean Twp.).

A kitchen inside one of the apartments.

Gopal wasn’t surprised to learn Morris was doing something to serve veterans. He’s seen it many times before.

“He does so much for veterans,” Gopal said. “I can’t tell you the number of times he calls, and it has nothing to do with business, but veterans. He wants to help. He’s extraordinary. And his heart is in the right place.”

The only thing that surprised Gopal was to see Morris literally out in front on the issue.

“I don’t think I’ve ever heard Jack talk in public before,” he said.

Morris said he was eager to take the mic on this night, giving a short speech. He said it’s important others understand the needs of veterans.

“We need to spread the word just by talking to the media and talking to the public officials who came out here,” he said. “They need to see what affordable housing is. It’s not low-income housing. It’s where you provide for people who work or have worked in our communities. And what better way than to promote and to give back to the men and women who fought for this country.”

He wants to start a trend in New Jersey. Morris, in fact, already said there are plans in the works to create more veteran-preferred facilities. He wants others to do the same.

“Hopefully, other people will see this and copy what me and my partner, Joe Marino, have done,” he said. “This is out of our pockets; there are no government subsidies. We do this because we want to do this and there’s others that should do it and I hope they do it.

“We want to be able to provide houses you or I would want to live in.”

Morris more than stepped up to the plate.

After giving a heartfelt speech, he called up members of the local chapter of the Veterans Community Alliance and thanked them for all that they do.

“I appreciate everyone coming out here, so everyone sees, and everyone hears what we’re doing here,” he said to the crowd. “Hopefully others will do the same in their communities.

“Somebody has to start, and we believe we’re the start to seeing what can be done when people put their hearts and their minds to things. And that’s what we’re doing here today.

“It’s not just about a grand opening for Edgewood Properties or for The Edge, it’s about our veterans — that’s what is important.”