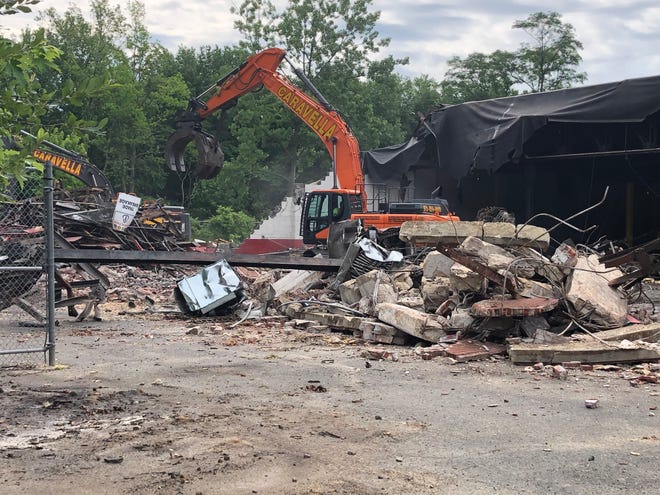 Demolition on Coca-Cola building in Neptune Township begins. The Coca-Cola plant, once used as a bottling and distribution center has been vacant since 2011.

The dilapidated old Coca-Cola bottler’s warehouse on Route 35, which has sat empty for nearly a decade, is coming down.

Workers were demolishing the building Wednesday to make way for a possible retail development called Marketplace at Neptune. A plan is going through the final stages before it is submitted to the Neptune Township Planning Board, said Joseph D. Morris, executive vice president at Edgewood Properties in Piscataway.

“It was a positive step to demolish the building,” Morris said. “It is an antiquated building so it doesn’t work for anything that is out there.”

Atlanta-based Coca-Cola Refreshments, a bottler, closed its distribution and sales office, which sits along the Route 35 circle at Asbury Avenue, in October 2011. The 13.45 acre property was sold in 2015 for $2.6 million to Piscataway-based M&M at Neptune LLC., according to DataUniverse.com.

The developer hopes to include medical, food, retail and convenience store uses as part of its plan, Morris said. “A plan is in the process of being finalized to be submitted to the planning board,” Morris said. “We are down to the final tweaks and strokes.”

Reports have noted discount grocer Aldi, which has a store farther south on Route 35 in Neptune, as one possible tenant.

Morris said no tenants have been signed yet.

“I have spoken with just about everybody who would be a logical approach to that project,” Morris said. “We are keeping our eyes and options open and moving forward with a good plan. We are talking with a lot of people.”

The warehouse was constructed in 1955. Morris said it “didn’t make sense to keep it there.”

Neptune Mayor Robert Lane Jr. noted the history of Coca-Cola working out of the building.

“In its heyday, it was a great place,” Lane said. “It has been an eyesore. We are going to make way for a new project there.”