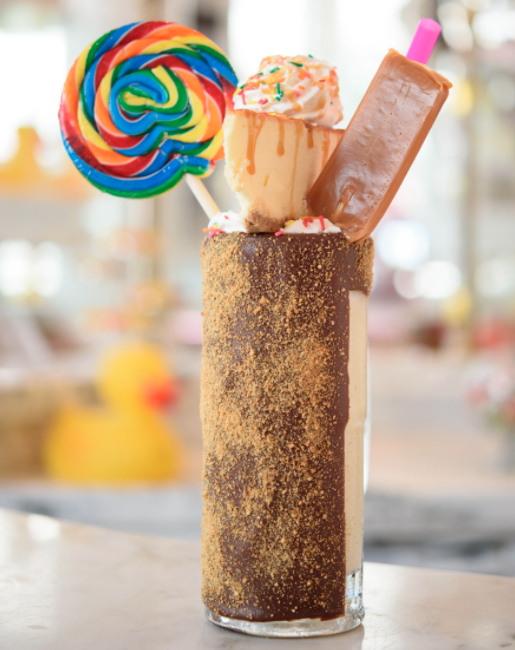 Sugar Factory is coming to Towne Place at Garden State Park in Cherry Hill, bringing all its fun concoctions.

Since the early 2000s, Cherry Hill’s bustling complex Towne Place at Garden State Park has grown and evolved in the former Garden State Park racetrack and nothing, not even the pandemic, has stopped the ongoing project.

M&M Realty Partners envisioned a shopping center and residential development in the former racetrack site. The racetrack closed in 2001 and was demolished around 2004. The developers  moved the development forward in phases over the next 17 years.

In January, the company signed leases for national food chains Chopt Creative Salad Co., a salad and grain bowl eatery, and &pizza, known for its oblong-shaped pies. They also negotiated with several other tenants yet to be announced.

More:Expansions, takeout and other updates on ‘national landmark’ Donkey’s Place

With the new cast of operators, there will be openings at the shopping center starting at the end of this year and into 2021. Among them is the much-anticipated is Sugar Factory, which announced in November it would replace Zinburger at the location in mid-2021.

The confectionery business is known for its extravagant sweets and goblet drinks that have attracted celebrities including Kendall and Kylie Jenner, Britney Spears and Drake. There are no updates on construction yet.

Cherry Hill will be one of 15 new Sugar Factory locations scheduled to open in the near future.

Zinburger closed in March 2020 after the statewide indoor dining restrictions for restaurants were instituted to flatten the COVID-19 curve. The developers immediately reached out to several restaurants they had a relationship with, including Sugar Factory.

With more than a dozen locations across the country, the new restaurant will be the second in New Jersey; the first one is at the Hard Rock Hotel & Casino in Atlantic City.

The company added a location in Cherry Hill to expand into a more suburban area to satisfy a family-friendly demographic, representatives said.

“We are excited to introduce our high-energy, sweet restaurant and brand to the residents of Cherry Hill, New Jersey,” said Larry Rudolph, a partner at Sugar Factory. “From our colorful and vibrant dishes to our over-the-top desserts, every moment at Sugar Factory Cherry Hill will offer guests a memorable and Instagrammable experience from the minute they walk in to the minute they leave.”

From a “COVID impact standpoint,” restaurants like Chopt and &pizza and grocers such as Trader Joe’s and Wild Fork, joining the shopping center is a success that Morris said couldn’t have happened without the township.

“Cherry Hill did an outstanding job really reacting and responding to the needs as they were changing … whether it’s drive-thrus … [or] wider sidewalks to accommodate outdoor seating,” Morris said. “We were proud that these next batch of tenants that were coming in, which thankfully is significant, are … able to have those needs addressed.”

The pandemic changed how Morris and his team looked at phases of the project, he said. Specifically, with the pandemic ongoing, they are watching  how new developments will drive consumer demand this year and beyond.

Morris, who’s been involved in the Cherry Hill project since 2004, said he’s never seen the level of activity and interest in leasing since he joined.

“I lay the challenge down – how many states, how many cities, how many towns, in the midst of COVID-19 got to witness a Costco, a Trader Joe’s, a TJ Maxx, a Home Goods opening up in one project?” Morris said. “How many of those people saw the signing of Sugar Factory, the signing of other restaurants … all the things that are happening over there?”

He attributes this “tribute to the strength of the project” to the proximity to Philadelphia and surrounding communities, and the township’s vision and planning efforts.

Along with the retail activity, Morris said five concierge-level apartment buildings will open in 2022.

The general development plan for the 225-acre site was amended to add a hotel with a 5,600-square-foot rooftop restaurant and bar, an Old Navy store, additional retail space of almost 18,000 square feet, as well as the expansion of an existing street, Town Center Drive, into what is now a pedestrian plaza between two commercial buildings.

“It’ll be a grand boulevard … [and] mixed-use,” Morris said. “We have retail, a ‘Class A’ office space. We will have a hotel and bar up top and then your grand boulevard of residential included in that. Then you pick up at the traffic light and [it] goes right into Costco. So, it just makes life a lot easier for the residents that work and live there.”

In June, the planning board approved the Old Navy store and street expansion and gave preliminary site-plan approval for the 140-room hotel.

More:Crumb: Denim chef is back with a sandwich and salad venture in Haddonfield

An ’economic powerhouse in South Jersey’

With the addition of Sugar Factory and other developments, Mayor Susan Shin Angulo said Cherry Hill has established itself as the “economic powerhouse in South Jersey.”

Since the early 1960s, Cherry Hill has been a shopping destination for the Philadelphia area, beginning when the Cherry Hill Mall opened as the first climate-controlled indoor mall in the eastern United States.

The mayor said the success of Garden State Park speaks to the “gravitational pull” of the township “that we have attracted some of the most desired retailers and restaurants in the country.”

Angulo said the shopping center is an “excellent example” of economic development evolving to keep up with the current commercial demands – citing the shopping center’s walkable outdoor experience, which consumers may prefer during a pandemic.

Angulo said she is pleased that despite the pandemic, Cherry Hill is providing brand-name retailers and commercial diversity for visitors.

“When people go to Garden State Park, they don’t just go in and out,” Angulo said. “They go for the grocery experience as well as … go over to DSW and pick up a pair of shoes or even go to Nordstrom … stop at Barnes and Noble’s… Then on top of that, they can stop at Cheesecake Factory for lunch … or go to Kabuki if they need to for dinner. So, it just creates a better experience for both the shoppers and the businesses – basically a one-stop-shop for the shoppers.”