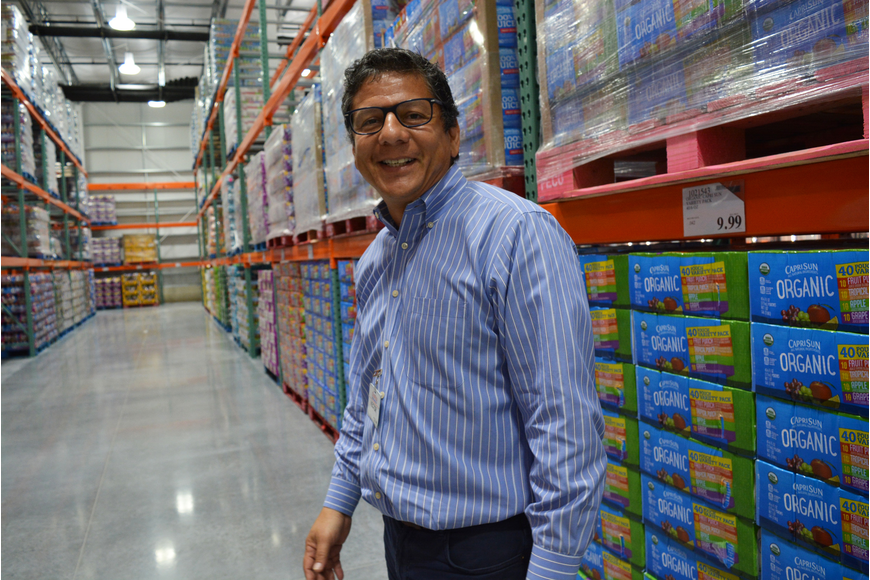 Costco Manager Hector Mencia s has been with the company for 30 years. He says attention to detail and creating a great customer experience is important for success at any Costco location. - Photo by Pam Eubank

When Hector Mencia started as a part-time employee at Costco Wholesale in 1989 in California, he would set up a hotdog stand at the front of the store. He sold Costco members a hot dog and a soda for $1.50.

Thirty years later, the deal is even better.

Mencia, who is transferring from Costco’s Clearwater store, is the general manager of East County’s new Costco, which is slated to open at 8 a.m. Aug. 21 at the northeast corner of Interstate 75 and State Road 64 at 805 Lighthouse Drive, Bradenton.

When it does, its shelves and floors will be stocked with about 4,000 items including everything from organic berries and toilet paper to leather couches, Segway brand go-karts and even a four-carat, $65,000 diamond ring. It will offer items from its private-label, Kirkland Signature, as well.

About 1,500 of the items offered will be available for a limited time, usually for a month or two. The store also has “road shows” featuring certain vendors for about 10 days at a time. For the grand opening, there will be a road show of products by Traeger Grills and Lovesac, which offers beanbag-style chairs and other furniture, Mencia said.

Mencia said offering the road show and limited-time products creates excitement for members, which allows them to try different items throughout the year. Costco also moves regular items around, which encourages members to explore and discover new items as they go.

“We try to create that treasure-hunt atmosphere,” Mencia said. “There’s always something new.”

For the past three months, contractors and Costco employees have been busy getting the warehouse built and stocking it for the opening. Mencia said Costco builds and opens its warehouses in 110 days.

He said the company uses a streamlined approach to its buildout by largely sticking to vendors it has used on other projects and having its regional distribution center, located in West Palm Beach, receive and organize initial shipments of goods.

“It helps us stay on schedule,” Mencia said. “The support system we have is pretty amazing.”

The warehouse itself begins receiving products about one month in advance of the opening, starting with nonperishables like televisions and paper towels. Frozen goods can arrive as early as two weeks before opening, but fresh products are put out just days before, Mencia said.

Costco uses a schematic design to ensure products get to the right place.

As Mencia walked through the store, an employee measured the distance between two pallets she was setting up for a display. Mencia said such precision is important operationally but also as part of the customer experience. Even in the parking lot, Costco uses double lines between parking spaces, so members don’t have to worry about their vehicles being dinged because they are parked too closely together.

“Even though we are a no-frills operation, look at the lighting on the floor , the shine,” Mencia said, pointing down an aisle. “We take pride on how it’s lit, how straight, how clean. To put a scratch on the floor is a big deal.”

It also helps that about half of the new store’s roughly 200 employees — half part time and half full time — are transfers from other locations.

Mencia said Costco offers higher-than-industry wages ($15 for a service assistant to start) and benefits to employees and has an enjoyable working culture, which translates into a low turnover rate — just 6% for employees who pass their 90-day trial period.

“Our employees are our best asset,” Mencia said. “Even though we’re a multimillion dollar business, the feeling you get from the members and employees is it’s like a mom-and-pop store. You get to know the members. They feel [like] part of the business. They give advice and suggestions.”

Mencia said Costco can get up to about 2,500 members visiting the store per day. On opening day, however, he expects to see at least 5,000 people.

The Costco Wholesale will be the anchor of a future entertainment-and-dining-focused shopping destination being created by M&M Properties, a joint venture between Edgewood Properties Owner Jack Morris and J&P Holdings Owner Joe Marino.

Joe Morris, senior vice president of leasing and acquisition for M&M, said plans for the future Marketplace at Heritage Harbour still have not been finalized but that there is a proposal for two buildings, totaling 130,000 square feet, to go in north of Costco. No leases have been executed.

A mix of restaurants, retail and other uses will likely go in along the southwest portion of the total 106-acre Marketplace property.